Proud to be an ESRI Partner

The final phase of this analysis is the final construction of Space Time Cube (STC) to study the emerging trends of the Covid-19 pandemic in US counties over 100 days of data collection. Phase III contained an extensive analysis on how to create the data structures that allows for many different ways to look at Covid-19 from a spatial temporal perspective.

Recall that a STC (above right) is a series of bins that contain a measurement value of some type. In the simplest cases like shown above, the best cases scenario is to have a "perfect cube" to work with so all of the contemporary theory on spatial points, patterns, and relationships behave in best way possible.

To understand this process, we must first define a few critical components of the underlying process and that is the concept of spatial autocorrelation.

Zero autocorrelation is the case where no spatial effect is discernible and observations seem to vary randomly through space. It is important to be clear about the difference between negative and zero autocorrelation, as students frequently confuse the two.

Describing and modeling patterns of variation across a study region, effectively describing the autocorrelation structure, is of primary importance in spatial analysis. Again, in general terms, spatial variation is of two kinds: first- and second-order.

First-order spatial variation occurs when observations across a study region vary from place to place due to changes in the underlying properties of the local environment. For example, the rates of incidence of crime might vary spatially simply because of variations in the population density, such that they increase near the center of a large city.

In contrast, second-order variation is due to interaction effects between observations, such as the occurrence of crime in an area making it more likely that there will be crimes surrounding that area, perhaps in the shape of local ‘‘hotspots’’ in the vicinity of bars and clubs or near local street drug markets.

In practice, it is difficult to distinguish between first- and second-order effects, but it is often necessary to model both when developing statistical methods for handling spatial data".

The essential idea of any approach to autocorrelation is to assess how similar or different attribute values at geographic locations are relative to how spatially close or distant are the associated locations. In broad terms, it is easy to see how we can assess similarity in attribute values using some simple calculation based on the difference in the attribute values. The real research question is how to incorporate spatial proximity into a measure of autocorrelation."

There are two other things we need in order to look at spatial autocorrelation before we look at a test case from the current Covid-19 dataset.

First, we need to define what we mean by neighbors. Let's look to the right and we will examine one of the hot spots on the southern tip of Florida. The primary focus here is to examine what defines a neighbor? If the grid is a lattice like in the figure below (right) is a unit square then we can see one square (not on the edges) shares a border with every other square thus forming a Rook's case in shared borders.

If you examine the Florida example of a Rook and Queen cases in the figure, it becomes obvious that if we are trying to identify spatial relationships between US counties, simply using a nearest neighbor approach such as defining an arbitrary radius of x miles or using a Rooks case only will not capture all of the relationships we are interested in; at least not in the most precise way possible.

If you examine all of the 3,142 contiguous counties in the United States (the counties targeted in this analysis), you will see many counties are not bound by simply geometry. In fact some counties may have one or two neighbors or seven or eight neighbors in a Rook's alone. Thus, to account for this, the most sensible strategy to study the Covid-19 data on the US county level was by using a Queens Case of shared borders to maximize the number of neighbors we will use in creating the space time bins.

More generally, the element in row i, column j of the weights matrix, denoted Wij, represents the relationship between location i and location j, so that each Wij is dependent on the spatial relationship between locations i and j. The Wij will have a value of 1 if two locations are adjacent and a 0 if they are not. This is what we refer to as adjacency.

The figures below demonstrate how this process works using a simple example.

The following R code calculates the Queen's case contiguity of the US counties included in this analysis as a method of studying of how many neighbors collectively are shared nationwide.

#This is accomplished using the ploy2nb() function. With 3142 counties this matrix will be big!

#If you use the row.names function, this will provide the county fips as an index

Here are the results and the number ID's represent the County FIPS codes to easily check and audit the results:

Finally, it is helpful to know that the mean number of links in the US is about 6 neighbors if we are calculating a queens case in the emerging hot spot analysis. I used a more conservative value of a minimum of 4 neighbors in the current maps series but future map series will reflect the intelligence gained through this analysis. A histogram of the distribution of the Queen's neighbors has also been included and not surpisingly, it follows a  normal distribution! 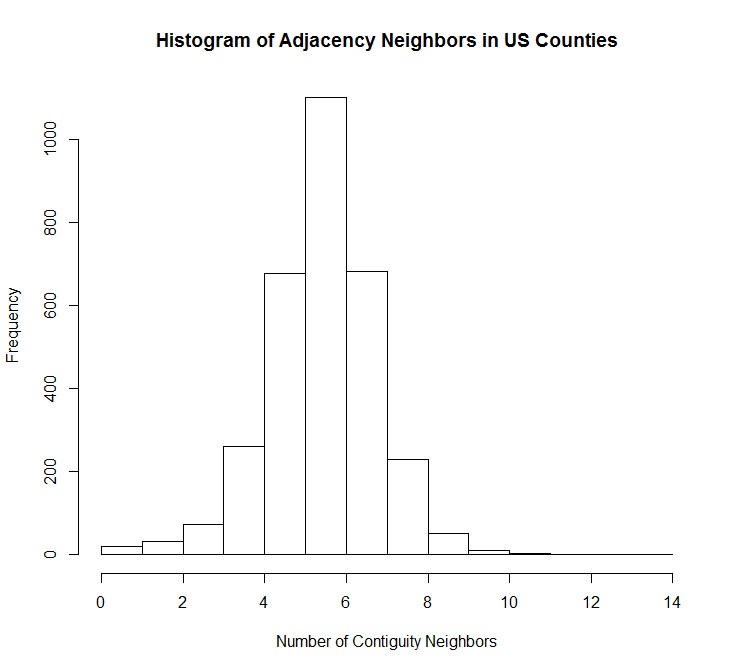 Histogram of Adjacency Neighbors in US Counties

The construction of the STC happens in ArcGIS Pro. I felt there was a need for me to create all of this groundwork to create ease of use once the data structures have been built. This essentially falls in the 80/20 rule that most statisticians spend 80% of their time on cleaning and preparing the data and 20% actually analyzing it. This was no small feat.

The STC functions in ArcGIS Pro are very poweful tools provided you know have the know how and the spatial statistics background to understand what is happening at every step. All of the phases of this Covid-19 project were designed to address how this entire process unfolds: from examining the stream of data coming in, to building the data structure through EDA, and finally using this information to build a spatial temporal construct good enough to answer some questions about the Covid-19 pandemic, like "I know six weeks isn't a lot of time normally, but how can I visually understand what has happened over this time?"

So this is how I speak on Covid-19, through the lens of science and provide information to best of my ability to inform the public about my findings and what my interpretations of these findings are. It is imperative to always be transparent in these processes, since our scientists in the government have bowed out in favor of magical thinking.

Having said that, let's look at the magic of the space time cube!

The first thing we do is write a master shapefile of the newly created data structure, this example is from the data collected through May 5, 2020. This process can be completely automated using a jupyter notebook inside ArcGIS Pro, but since I have streamlined nearly all of this process, a few clicks in the UI are minimal. Take a look at this gallery to see the steps of how the cube is constructed: 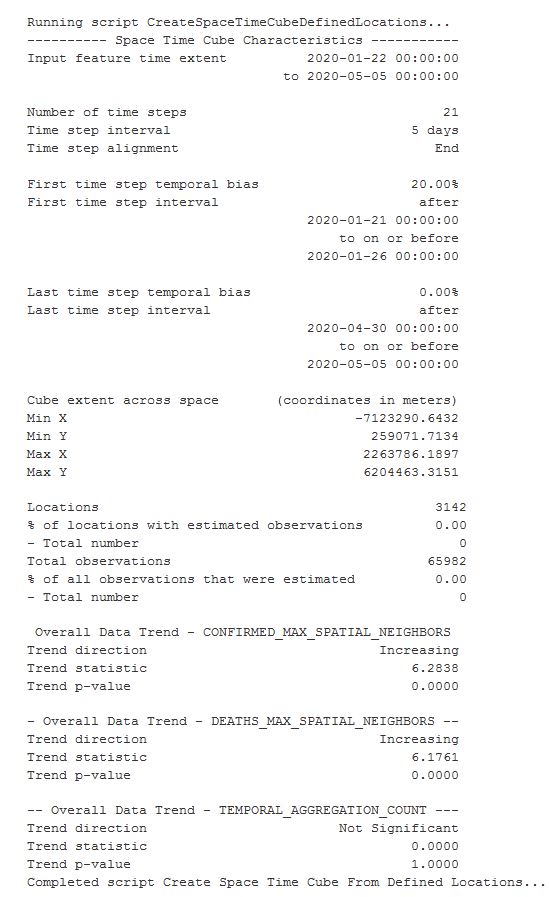 The Construction of the Space Time Cube is Now Complete, Now What?

Some things in life are never really finished. The journey to complete this exploratory analysis took many weeks of going over data sources, parsing through things that required major precision to truly understand what is truly going on. Let's take a look now at what the map gallery on the next pages will look like in context. Remember context is everything.

In spatial statistics, there are two fundamental processes at work: Global and Local measures. Since I have deemed this to be an exploratory process, we are not bound by strict rules of interpretation, at least not yet. But the fact remains that despite even constructing these maps using rather conservative parameters, the trends and hot spot maps in the following pages show a continued upward trajectory not only in specific cities and their surrounding counties but many rural areas as well.

The next steps will begin constructing additional maps and time series that address the state by state trajectories.  In the meantime, please have a look at what the Space Time Cube looks like in 3-space.